Q. Every time I make a list—for example 1, 2, 3 or a, b, c—Word second-guesses me and tries to complete the numbering sequence on its own. Some people may think that’s cool, but I find it annoying. Is there some way to stop it? 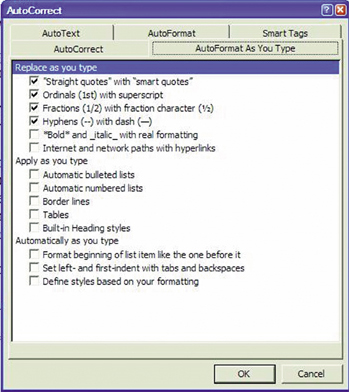 A. Not only can you halt the numbering mischief, but you can halt other instances of Word’s second-guessing. The culprit is the AutoFormat As You Type utility that’s included in AutoCorrect . While the idea behind AutoCorrect is great—and it even does some jobs pretty well—many users have become frustrated when it incorrectly anticipates what you want to do—imposing the numbering sequence, for instance, when you’re making a list.

Here’s how to turn it off and get rid of similar AutoCorrect problems. Click on Tools, AutoCorrect Options. Then click on the AutoFormat As You Type tab, and that will bring up the screen at right.

Now, under Replace as you type , uncheck the box marked Automatic numbered lists . If you dislike the automated bulleted lists, then uncheck that, too.

If you don’t want Word to automatically convert your typed URLs and e-mail addresses into hyperlinks, uncheck that box also.

Supercharge your audit process with AI

Auditors today can employ AI to automate tedious tasks and gain far greater insights from their clients’ information. This free report lays out a five-step process for implementing AI and shows ways AI can add value to the auditing process.