Changing Your Identity In Office

Q. My division was reorganized and relocated. We now have a new name and I’ve been moved to a different computer, which raises some problems. I recall that when I first loaded Microsoft Office, I was asked to enter my name and my organization’s name, which became a default of the application. So, for example, whenever I insert a comment in an Excel cell or a Word file, the comment box adds my identification—either by name or initials. So whoever is using my old computer is generating comments with my identification and the computer I’m using is generating someone else’s ID. How can I change that?

A. You’ve got two choices—and neither is attractive. Either you can remove and then reload the entire Office application or you can go into the system, very much like a brain surgeon, and carefully remove all traces of the old names from Windows’ registry (which is the operating system’s memory core—the software’s cerebellum) and substitute the new ones.

Personally, I wouldn’t choose the latter. It’s slow and tedious, and, worse, you can easily foul up your computer if you make one wrong move.

I would bite the bullet and reload the Office suite. In all likelihood, your data files will not be in jeopardy, but back them up just in case. Also, be sure you have all the Office installation CDs at the ready—and the password. 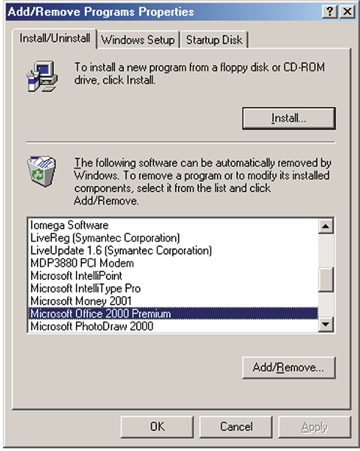 The good news is that when you reinstall the applications, all your old defaults probably will be saved by the operating system’s registry; it remembers all that information and usually reinstalls it automatically.