Q. I love Word’s AutoCorrect function. Not only does it fix my frequent misspellings and typos, it saves me time. For example, when I type AICPA , I’ve programmed it to spell out the full name—American Institute of CPAs. However, sometimes it’s a real pain—such as when I really want it to read AICPA . I thought at first I could use lowercase letters in my shortcut word (hoping it would follow the command if the word was typed in capital letters). But I discovered that AutoCorrect isn’t case sensitive. Have you got a solution?

A. I do. First, for those who are not familiar with the AutoCorrect function, here’s how it works: To program Word to fix common errors or to spell out a shortcut, go to Tools, AutoCorrect , and this screen will come up: 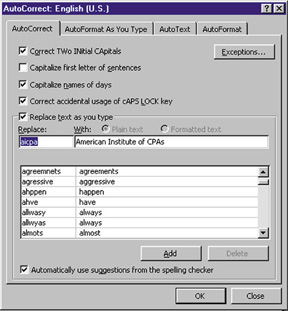 As you can see, the left-hand column contains the misspellings and the shortcuts (for example, aicpa for American Institute of CPAs) and the right hand column the corrections and replacement text.

Q. When I’m making a presentation with Excel, there are times I want to highlight a few key numbers to make them stand out from all the other numbers. I know I can color them—and that’s helpful—but I’d like to give them more emphasis. Ideas?

A. In addition to coloring them, try zooming them, too—that is, enlarging just those numbers. Excel’s Zoom function can select which cells to enlarge. For example, highlight your numbers, then click View, Zoom to evoke this menu: 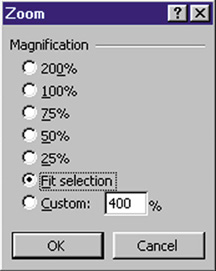 Now check Fit selection and Excel will make those numbers as large as possible while still fitting on one screen. When you’re done, you can undo the enlargement by pressing Ctrl+Z, or just evoke Zoom again and select 100% or go to Edit and Undo Zoom .

Q. One of my duties is to calculate the number of business days—leaving out Saturdays and Sundays—between two dates and then insert that information in a spreadsheet. Is there a software program which does that?

A. You’re in luck—you don’t need a special program. Excel’s Networkdays worksheet function does it. However, if you did a typical installation of Excel, without Analysis ToolPak, that function will be missing. That’s not a problem, though; it’s easy to install.

First, to check whether the function is in Excel, go to Tools, Add-Ins and this menu will appear: 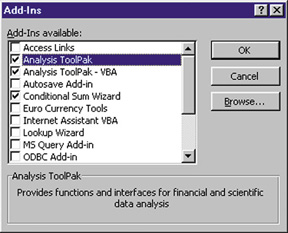 Place a check next to Analysis ToolPak and click OK . In all likelihood, Windows will report that it must install the function and will ask you to insert the Microsoft Office disk in the CD drive. Once you do that, the installation will take a few minutes. You probably will have to reboot the computer before it will function.

Once Analysis ToolPak is loaded, use this formula: =NETWORKDAYS(A2,B2) . Put the beginning date in one cell and the ending date in the other.

If you want to figure just the spread between two dates, including weekends, enter the formula: =DAYS360(A2,A3) .