Two for the Money

Get affordable coverage for an uninsurable risk with a dual-trigger policy.

ost insurance policies have a single trigger. It’s straightforward: If an accident destroys a manufacturing plant, the policy pays. In the past year, however, forward-thinking risk managers at some companies have begun to experiment with dual-trigger policies, which are less likely to pay off—and are therefore cheaper—than single-trigger policies. In the improbable circumstance that both triggering events transpire, the financial consequences could be devastating to the insured.

Dual-trigger policies do, however, offer the opportunity to insure against some potentially disastrous situations that would be virtually impossible to get coverage for by any other means. The following are examples of dual-trigger policies as purchased by

2. The extra maintenance expenses associated with a storm, such as sending out crews to deal with downed power lines, exceed the minimum level, $Z, that is specified in the policy. 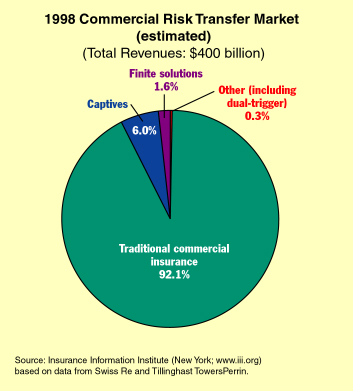 Dual-trigger insurance (a subset of “Other”)
is brand-new and still only a minuscule part
of the $400-billion commercial
insurance market.

1. The value of X, a specific equity portfolio, falls below $Y (designated in the policy).

2. Medical malpractice claims exceed $Z million (the exact amount of the ceiling is set by the policy).

1. The price of copper falls below X cents/lb.

1. The associated movie brings in less than $X million at the box office, as published in the entertainment community’s bible, Variety.

“The possibility of both events occurring at the same time is much lower than the possibility of each occurring individually,” explains Carl Groth, senior vice-president and director of alternative risk transfer at Willis, the New Yorkbased insurance broker. “As a result, the probability of a payoff in a dual-trigger is less than the probability of a payoff involving only one of the triggers. That mathematical fact enables an underwriter to take a risk that heretofore has been uninsurable and, by combining it with another, uncorrelated exposure, to make it insurable.”

In each case, the policy pays—or pays more—only if both events occur. In the promotional toymaker example, “if both events trigger during the policy period, the policy limits expand to absorb the company’s deductible, thereby providing first-dollar insurance coverage when the buyer needs it most,” says Groth, who structured the policy. In other words, if the company has produced a lot of toys tied in to a movie flop, a money-losing proposition, and it is also suffering from some other unusual expense, such as a spike in workers’ compensation claims, the policy not only pays but the deductible is waived as well.

WHO’S ON THE TEST RANGE?

So far, about two dozen dual-trigger programs have been bound—finalized—in the marketplace. Although there is no limit to the possible trigger combinations, energy concerns account for the majority of dual-trigger policies in force. In most cases, the dual-trigger policies written for energy suppliers pay off when the spot market price for the relevant energy commodity exceeds a set limit and a casualty event that limits supply happens at the same time.

For example, Great Bay Power Co.—an electricity generator and supplier based in Portsmouth, New Hampshire, with $32 million in 1998 revenues—recently purchased a dual-trigger policy. Great Bay wants to guarantee firm electricity prices to its energy users on a long-term basis, but whenever its generating plant shuts down, the company has to replace that electricity on the spot market—often at higher cost. Consequently, it has difficulty finding long-term customers and, instead, sells mainly to short-term buyers.

Although Great Bay could have gone to the capital markets to buy a call option to hedge the spot market risk (see “Hedging Your Megawatts”), it did not want to speculate on the price of electricity. It also could have bought an insurance policy absorbing the plant shutdown risk but determined the coverage was too expensive. Instead, it bought a dual-trigger policy that links the risk of a plant shutdown to the cost of electricity on the spot market. “If our generating asset shuts down because of an unplanned event, and the price of electricity at that time is above a certain prenegotiated strike point, our insurance pays us the difference between the strike price and the actual market price for that power,” says Frank Getman, Great Bay president and CEO.

In dual-trigger deals, the triggers typically involve a traditional insurance exposure and an event tied to a financial index (such as those associated with various commodities and stock markets) or recognized sources of quantifiable data (such as the U.S. National Weather Service’s meteorological reports). The idea behind the strategy is to make a very difficult-to-insure risk (the financial risk) insurable by linking it to an exposure that has little or no correlation to it.

“If we can obtain quantifiable data on a particular exposure, such as the Nuclear Regulatory Commission’s data regarding nuclear plant shutdowns, and can combine that exposure with a pure insurance risk that has been analyzed actuarially, we can put together a cost-effective risk transfer solution,” says Doug Oliver, vice-president of financial engineering at AIG Risk Finance, a New Yorkbased insurer of several dual-trigger programs.

THE ALLURE OF THE SECOND TRIGGER

Dual-trigger policies offer companies many attractions. These include

Cost. The best-priced deals are those involving the least correlated risks, that is, if one trigger is pulled, the chance of the second one being activated is remote. Basically, the less correlated the risks, the lower the price of the product, making it cost competitive when compared with a derivative. “By linking two exposures together, we can come up with a price that often is much lower than the cost of an option or other derivative,” says Ed Zaccaria, senior vice-president of ACE USA Power Products.

According to Joseph Spencer, FirstEnergy Corp.’s director of risk management, his company’s portfolio manager evaluated the cost of a derivative to hedge the risk covered by its dual-trigger program as “four to five times more than what we are paying for our insurance policy.” The cost of the dual-trigger insurance policy falls between 4% and 8% of its $100-million coverage limit, or roughly $4 million to $8 million. (See case study, below.)

Predictable payoff. Cost is not the only reason that a dual-trigger may be more advantageous than a capital market instrument. An insurance policy is much more predictable and less speculative than a derivative. “A derivative pays off or doesn’t pay off, irrespective of whether or not the buyer has a loss,” Zaccaria explains. “For example, say you buy a weather derivative that is triggered at a temperature of 92 degrees [Fahrenheit]. Meanwhile, you have a power outage, followed by three successive days of 90 degree temperatures and a spot market price that is extremely high. You incur a significant loss, but you can’t collect on the derivative because you haven’t met the strike price. Insurance does away with the speculative nature of hedging this business risk.”

Smoother P&L. The accounting treatment for insurance is considerably simpler and less controversial than accounting for financial instruments. Insurance avoids the onerous mark-to-market provisions accorded derivatives under FASB Statement no. 133, Accounting for Derivative Instruments and Hedging Activity. “Generally, at any particular time, the value of a financial instrument such as a derivative can be above market or below market—worth more or less than what you paid for it. The rules require companies to record those changes on their financial statements—marking to market,” explains Zaccaria. “Some months or quarters you might report a profit on the instrument; some months or quarters you might not. The profit and loss statement jumps up and down based on fluctuations in the derivative’s market value. Meanwhile, determining that value is difficult. Why bother with all that aggravation?” Zaccaria asks. “If your goal is to smooth the revenue stream by hedging business risk, insurance has more going for it than a derivative,” he says.

Kudos from the Street. “We’ve received very positive attention from our shareholders and Wall Street for better quantifying our bottom-line costs,” FirstEnergy’s Spencer says. “They see this as a very viable smoothing mechanism.”

But the question is, Are dual-trigger policies really insurance? By linking one of the triggers to a market index—such as spot power prices, or foreign exchange, interest and commodity rates—do the contracts hide what is otherwise a derivative? If this is the case, the accounting implications loom large.

There is no simple answer. “The devil is in the details of the particular dual-trigger strategy being undertaken,” says Dick Warren, senior vice-president and controller of Fireman’s Fund Insurance Cos., in Novato, California, and a member of the AICPA insurance companies committee. “Accounting professionals must sift through these deals to determine whether an actual risk is being transferred—the hallmark of an insurance contract. The problem is when you find both an insurance piece and a capital markets piece in the same contract. Do you take the insurance part and account for it according to insurance rules and then take the derivative part and account for it according to capital market rules? We’ve gone from the complicated to the confusing.”

Despite what the organizations selling dual-trigger policies say, could a strategy in which one exposure is tied to a market-based index simply be a derivative in disguise? Paula Panik, vice-president of accounting policy at the Travelers, a Hartford, Connecticutbased insurer, advises caution. “The rules under FASB Statement no.133 are extremely complex,” she says. “Certainly, a contract in which you are hedging a price tied to an index may be viewed as a derivative, a recordable asset requiring an assessment of market value. Accounting treatment of an insurance policy, on the other hand, differs depending on the nature of the contract. When you combine the two in a dual-trigger, however, questions may arise.”

The key, both Panik and Warren agree, is to make sure the dual-trigger policy contains a bona fide insurable exposure—an event that causes a demonstrable loss. “Each one depends on whether an insurable interest exists,” Panik says. “If you can demonstrate a potential loss, there should be no mark-to-market accounting implications.” Warren concurs: “If you call it an insurance product, you have to make sure there is actual risk transfer.”

As a practical matter, the companies that have bought the policies are treating them as pure insurance. According to Spencer, FirstEnergy’s director of risk management, his company accounts for its dual-trigger policy strictly as insurance, and he’s comfortable with that. Dual-trigger insurance vendors are even more emphatic. ACE USA’s Zaccaria bridles at the suggestion that dual-triggers may hide an embedded derivative. “We’re indemnifying our customers for a physical loss in the most traditional sense,” he argues. “It’s just that the way we calculate our indemnification is based on some market-oriented indicator. That fact should not be confused with a derivative.” He adds, “A derivative implies speculation. There’s no way to speculate with our product. The most you can lose is your premium. You can’t make money on our product or sell it to some counterparty like you can with a derivative. This is insurance.”

Consensus isn’t final on whether it is or isn’t, but the AICPA insurance companies committee expects to examine dual-triggers in the near future. In the meantime, a few adventurous corporate financial managers are using them to get more complete risk coverage at an affordable price, and their accounting policy advisers are blessing the insurance accounting treatment.