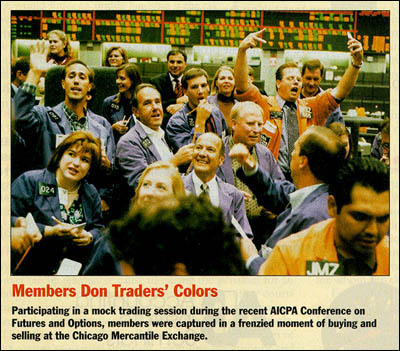 The Institute has entered into an agreement with Standard & Poor's (S&P) that will give members a 20% discount on the S&P Advantage and Advisor Insight services.

S&P Advantage is a package of nine investor information products under a single interactive interface. It is available either in CD-ROM or through the Internet.

A third product, Planner Insight , targeted to financial planners, will be introduced later this quarter.

The first in a series of print advertisements aimed at bankers advises lending officers, For financial information you can bank on, look to a CPA firm that is a member of PCPS.

The ads were recently introduced by PCPS, an alliance within the AICPA of more than 7,000 local and regional CPA firms.

The national campaign emphasizes the link between the work CPAs do as auditors and the credibility of the corporate financial statements on which bankers base their lending decisions.

The ads are also intended to build bankers' awareness of the peer review process of public accounting firms. They include information on how bankers can order firms' publicly filed peer review reports.

The advertisements will appear in the ABA Banking Journal every other month for the next year.

Christine Lynn Howard of Irving, Texas, won the Elijah Watt Sells gold medal by earning the highest combined score on the May 1998 semiannual Uniform CPA Examination. She placed first among the 54,000 candidates who sat for the exam.

Howard, who graduated from the University of Texas at Austin last spring with both MPA and BBA degrees in accounting, is currently an auditor with Ernst & Young in Dallas.

Arwin G. Zeissler of Troy, Michigan, won the second-place silver medal. Zeissler is a staff auditor in the Detroit office of Deloitte & Touche. Alan Kuska of Palos Heights, Illinois, won the bronze medal. He is an accountant in the Chicago office of KPMG Peat Marwick.