With a controversial change to rule 102(e), the SEC lays down a stricter definition of improper professional conduct.

L ast month, the Journal reported how SEC Chairman Arthur Levitt laid down the law for public accounting firms, their clients and the audit committees. (See Arthur Levitt Addresses Illusions ,' JofA, Dec.98.) However, the SEC wasn't finished. With a controversial regulatory change, the commission has become as strict with individual CPAs as with the firms and companies they work for. A proposed clarification to help judge when CPAs have crossed the line has generated enough response from the financial community and additional guidance to fill a file folder to overflowing.

The change had its genesis in June 1998 when the SEC took a new look at rule 102(e) of its Rules of Practice. Sparking the reexamination was a finding by the U.S. Court of Appeals for the District of Columbia Circuit, in Checkosky v. SEC , that the SEC had not properly defined improper professional conduct. In response, the commission proposed an amendment to clarify the term, noting in a June memo that negligent conduct could be considered improper professional conduct in certain circumstances.

Define your terms
The AICPA was hit hard by the phrase negligent conduct. It responded with a comment letter 17 pages long (not including the footnotes) that said that the negligence provision is not a reasonable and direct adjunct to the Commission's express powers.Indeed, [it] potentially reaches conduct that the Commission lacks power to sanction. The Institute also wrote a letter to its business and industry executive committee and the SECPS executive committee saying, it does not believe that a single act of simple negligencewhich the proposed amendment may well be interpreted to encompassshould ever constitute improper professional conduct' for purposes of rule 102(e).

After receiving more than 150 comment letters, the SEC issued a final rule with the clauses on negligent conduct left in. The final language lists two types of such conduct:

The SEC has made the final rulesome 50 pages, including explanatory material and the lone dissent from Commissioner Norman S. Johnsonavailable at www.sec.gov/rules/final/33-7593.htm . The AICPA material can be found at www.aicpa.org/belt/index.htm . The NASBA State Board Report discussed the new rule in its October 1998 issue.

I n 1995, CPAs greeted the newly enacted Private Securities Litigation Reform Act with cheersit was supposed to protect investors and end abusive securities class actions, which were often aimed at accountants. Among other things, the act encouraged companies to make voluntary disclosures by providing a safe harbor for forward-looking statements. The CPAs' joy was short lived, however, as lawyers took their cases to state courts, which the act did not cover.

But in November that loophole was closed when President Clinton signed into law the Securities Litigation Uniform Standards Act of 1998.

The new law says, Any covered class action brought into any state court involving a covered security shall be removable to the federal district court for the district in which the action is pending. The AICPA believes it will force potential plaintiffs to adhere to the spirit, as well as the letter, of the 1995 act. The SEC supported passage as did many high-technology companies, which often are sued because their stocks can be highly volatile. Various consumer groups and state regulators opposed the bill.

The final version of the bill, S. 1260, is available at http://thomas.loc.gov . Approximately 11 pages long, it is available in PDF format. 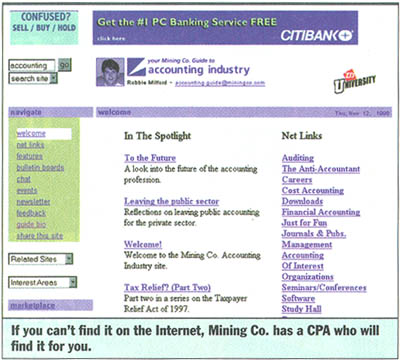