The AICPA has launched an advertising campaign designed to raise awareness of the profession among minority students. The advertisements, which feature famous athletes with their minority CPAs, read, Be a star in business Be a CPA!

Presented as role models for high school and college students considering a career in the profession, the CPAs are depicted in the ads as the stars on each celebritys financial management team. 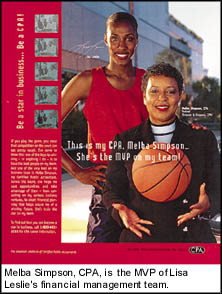 Those featured in the ads include Melba Simpson, a partner of Simpson & Simpson, CPAs, and her client, former Olympian Lisa Leslie of the WNBA Los Angeles Sparks.

In another ad, Michael A. Steele, CPA, a partner of Williams, Adley & Co., LLP, in Oakland is shown with his client Barry Sanders of the Detroit Lions.

Minority young people are less likely to have minority CPAs as role models because there are so few of us out there, said Simpson, explaining why the ad campaign was needed. I want to encourage minority students to enter the profession because it is a viable field. It is important for them to know that there are good career paths and opportunities in public accounting.

Future ads will include John Elway of the Denver Broncos and Robert Horry of the Los Angeles Lakers and their CPAs.

The advertisements will run in Vibe magazine and New Accountant magazine. In addition, mini-posters of the ads will be distributed to high schools throughout the country.