The AICPA professional ethics executive committee has approved a variety of new ...

CPAs practicing in nontraditional structuressuch as American Expresswill not be working in a professional ethics vacuum. New guidance from the professional ethics executive committee (PEEC) clearly spells out the applicability of the Code of Professional Conduct to CPAs in any type of entity and requires public accountants to adhere to independence standards no matter where they practice.

PEEC describes a fictional parent company called PublicCo (see chart, above), which owns a number of financial services companies. PublicCo buys some accounting firms, andas described in Alternative Structures and Government Accountants ( JofA, June98 )some CPAs in the purchased firms offer consulting and other nonattest services to clients on behalf of their new employers. Audit partners in the purchased firm, however, form Newfirm to continue to offer client attest services. These partners own a majority of Newfirm and may lease employees, office space and back-office functions such as billing from PublicCo. But how will this new practice structure maintain its independence? 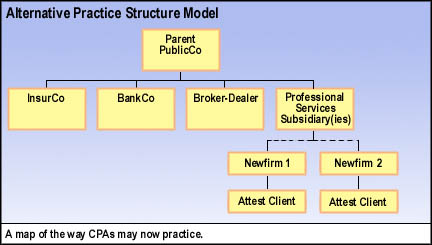 For example, PEEC recognized a possible problem when owners of Newfirm had to work with a direct superiora senior manager at the professional services subsidiary (see chart). The new guidance subjects such managers to the same independence requirements as a firm member. Also, Newfirm cannot accept an attest client that has a material investment in PublicCo or exercises significant control over it.

According to Ellen Goria, a senior technical manager in the AICPA professional ethics division, the language in the interpretation is similar to that in the exposure draft Omnibus Proposal of Professional Ethics Interpretations and Rulings , issued in April 1998. The final guidance is in Official Releases, page 82.

Other Omnibus issues
The ED also covered other provisions, which were approved earlier and can be found in the December 1998 Journal in Official Releases, page 147, and at the professional ethics Web pages, www.aicpa.org/members/div/ethics/index.htm . Of particular interest to government auditors is a provision that redefines client to include certain federal, state and local government entities that meet certain specified criteria. If the government auditor is independent under code rules, he or she can issue GAAS reports just like any public accountant. This and other provisions also were adopted relatively unchanged from the ED, says Goria.