T he National Commission on Restructuring the Internal Revenue Service held its second round of public meetings in November on the organizational structure and functions of the IRS, strategic planning and implementation, priority setting and performance measures. The commission also heard testimony on the burdens of an overly complex tax code on taxpayers and the IRS.

Congressman Rob Portman (R-Ohio), commission cochairman, said the group was still gathering information but should have an idea of the direction it would take in February. Among those testifying were former IRS senior staff members, representatives from the General Accounting Office and the American Institute of CPAs and a University of Chicago assistant law professor.

More oversight
Gene L. Dodaro, GAO assistant comptroller general, said the IRS needed stronger oversight, citing past failures of agencies and congressional committees in not having been tough enough in making the IRS determine how it would carry out its business vision. He said the commission should ensure the IRS will have effective implementation strategies.

Blueprint for simplification
Michael E. Mares, chairman of the American Institute of CPAs tax executive committee, said virtually every year Congress passes tax legislation of increasing magnitude and complexity. Treasury regulations interpreting those new provisions also are getting more complex. "As time passes, taxpayers, their advisers and the IRS face increasing uncertainty as to the correct tax treatment of an item." Mares said tax simplification would yield a number of benefits, including a more efficient IRS, better compliance and less frustrated and confused taxpayers.

Mares also told the commission the AICPA had established a task force that will submit additional comments and suggestions to the commission on the privatization of tax collection and processing as well as the need for a new approach to audit research, the modernization of tax systems and a business approach to IRS operations. For more information on the AICPA task force, contact Jean E. Trompeter, technical manager of the AICPA tax division, at 202-638-4512.

What's next
Jeffery S. Trinca, the commission's chief of staff, told members attending the AICPA Federal Tax Conference in Washington, D.C., that the commission would hold its next set of hearings in January and would hear from private-sector task forces in April. He also said the commission would perform a benchmarking study to examine various state and local tax collection processes. The restructuring commission is expected to issue its final report in July.

"The commission was given only one year," said Trinca. "We need to draw on the expertise of organizations such as the AICPA to point out problems and offer solutions."

Commission.com
More information on the National Commission on Restructuring the IRS is now on the World Wide Web. To read about the group's progress, objectives and issues as well as updated news and information on future meeting dates, visit its Web site at http://www. house.gov/natcommirs/main.htm.

A s many as 51 million taxpayers, or 45% of those who filed 1992 tax returns, no longer would have to prepare returns if the Internal Revenue Service adopted an alternative filing system, according to a report published by the General Accounting Office. Tax Administration: Alternative Filing Systems, published in October, examined the ramifications if the IRS prepared and mailed tax returns to taxpayers based on income reported by employers on form W-2 and the 1099 series information returns.

Not the best system for everyone
Under this alternative filing system, the IRS would mail returns and refunds or bills to taxpayers, who would then review the returns for accuracy and notify the IRS if they questioned the results. The GAO estimated that taxpayers could save up to 155 million hours on tax return preparation and the IRS could cut processing and compliance costs by as much as $37 million annually. However, professional tax preparers, financial institutions and employers could lose under this system. For example, the report said that preparers could lose millions of dollars in fees, and employers and financial institutions would be obligated to file information returns more quickly or electronically.

High hurdles remain
The IRS currently needs a long time to process information returns, so it is not likely that, under a tax reconciliation system in which the IRS would have to do even more return processing, taxpayers would receive their federal returns by the congressionally mandated April 15 deadline. The report said it was likely a return-free system could not be implemented until the IRS was prepared to meet the federal due date for filing tax returns.

The GAO also questioned the number of taxpayers that would voluntarily participate in the new system. Citing the results of a 1993 focus group, the report said the reconciliation system could fail because taxpayers did not trust the IRS to accurately prepare returns and they doubted procedures would be in place to obtain adjustments if they disagreed with IRS-prepared returns.

IRS urges more electronic filing
In response to the GAO report, IRS Deputy Commissioner Michael P. Dolan said the information to do a cost-benefit analysis might not be available and the costs of a tax agency reconciliation system would be higher than the costs to process electronically filed returns. Acknowledging the IRS's views, the GAO said there might be no need for the alternative filing system if the IRS could get most taxpayers to file electronically.

T he Internal Revenue Service developed form 8850 to help employers hiring certain low-income individuals determine if they are eligible for a tax credit. The Work Opportunity Credit Pre-Screening Notice and Certification Request was developed for the "work opportunity tax credit" in the Small Business Job Protection Act of 1996. The form is available through the IRS home page, http://www.irs.ustreas.gov , or by calling the IRS toll-free at 800-829-3676.

Under the 1996 act, employers hiring new employees from one of seven targeted low-income groups can receive a tax credit of up to $2,100 per employee. The credit applies to employees who start work after September 30, 1996, and before October 1, 1997, and was intended to give Congress, the Treasury Department and the Department of Labor the opportunity to assess the credit's effectiveness as a hiring incentive. 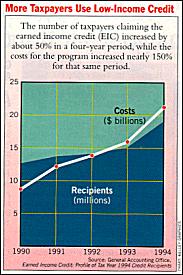 The target groups include

Form 8850 must be signed by both the employer and employee and submitted to the state employment service agency for certification no later than three weeks after the employee begins work. The IRS recommends the employer keep copies of the form, transmittal letters and any other documentation related to the tax credit for three years after claiming the credit on a tax return.