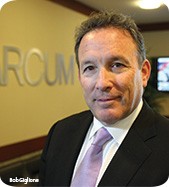 There’s a process to going through a merger or acquisition. It takes anywhere, in our experience, between nine and 15 months. It gives you time to spend with the people on the other side who, from the day you do the merger, are going to be your partners. Most of the time, you’re figuring you’re going to live with them for the next 20 years. Sometimes mergers don’t work. Maybe you go through the process, and whether it’s month three or month 10, you figure out that you’re not meant to work together. It’s not dissimilar from dating or marriage. Some people should be together, and some people shouldn’t. It’s the same at work. But if you figure out it’s not working, you figure out how to fix it. Or you try to unwind it.

It’s not like it was for the generation before us, where partnerships were forever. Not every partner lasts in every firm for their lifetime. It’s not an everyday occurrence, but partners do move occasionally from firm to firm. Every firm is not right for every person. You’re merging a firm, and the other firm’s partners may have made the decisions in the merger, but the staff had no choice. You just have to show people you care and have empathy. Honesty and being direct are important. Ultimately, the decision’s the decision. It goes a whole lot easier if you let them know you care and you listen.

It’s about attracting and retaining good talent. You give people a platform to work in where they can really excel, and you let them do their thing. You create an environment where people can be successful.

One of my clients was writer Robert Ludlum, who created the [Jason Bourne] character and wrote the books. He was my client from 1985 to 2001, when he passed away. I became the executor of his estate. … Then the movie, The Bourne Identity, came out in 2002, and that was a big success. We’ve made three movies since then [The Bourne Supremacy, The Bourne Ultimatum, and The Bourne Legacy], and I served as either executive producer or producer of those three films. We’re now working on the fifth Bourne movie, in which Matt Damon is slated to reprise his role as Jason Bourne, with Paul Greengrass directing. And we continue to publish books. We’ve done video games; we’re looking at some TV opportunities. This whole experience exemplifies the lucky part of life sometimes.

My role in producing the Bourne films is more about creative input and creative controls to make sure that the film is true to the character. Really what I do is all on the front end: helping to create the stories for the movies, working with the studio on actor choices and director choices, and things like that. We’re actively in the process of getting the next movie up and running. It should be out in July of 2016.

When we did The Bourne Legacy [in 2012], I think we were successful in expanding the Bourne universe where we could leave the Jason Bourne character for Matt Damon if he chose to return, while still expanding the world to show the audience there was more to the back story [with Jeremy Renner in the lead role]. There was more than just Jason Bourne. It expanded the world while at the same time left the role for Matt if he wanted to do it again.

—As told to Sheon Ladson Wilson, sheonlwilson@aol.com ,
a freelance writer based in Durham, N.C.