Which products and features yielded frustration or bliss? 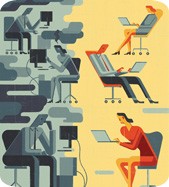 In this year’s survey by the JofA and The Tax Adviser, more than 6,000 CPAs assessed the software they used to prepare 2011 tax returns, revealing what they liked and disliked about their software. Overall, respondents were pleased with their software: On average, the products rated 4.3 out of 5. Ease of use, comprehensiveness, and accuracy were the most-liked features.

This year’s respondents also identified many of the same drawbacks as in prior years: The price of some of the leading large-firm products was a deterrent for some preparers, but users of the more budget-conscious products most often faulted them for lacking all the forms they needed or not being comprehensive enough in other ways.

This year, the survey also checked on newer ways of deploying and using tax software, finding that cloud computing, for example, while not yet widespread, is a growing trend among return preparers.

This year’s survey saw a decline in the market share for the three products named by a majority of respondents as the software they predominantly used to prepare returns. ProSystem fx Tax (CCH) (26%), Lacerte (Intuit) (19%), and UltraTax CS (Thomson Reuters) (18%) together still accounted for nearly 63% of responses. However, last year, these three products were used by 75% of respondents (see last year’s survey here).

The growth in other products resulted in two of them garnering enough responses to be included in the survey analysis: TaxACT (2nd Story Software) and TurboTax (Intuit). Almost 4% of respondents reported using one of these programs to prepare returns for clients. While still a small number, this represents a large increase over prior years: In both 2010 and 2011, 0.7% of respondents said they used TaxACT or TurboTax to prepare returns for clients.

Overall user satisfaction was little changed from previous years, with the ratings for most products hovering near the 4.3 (out of 5) average for all products (last year, all products also averaged 4.3). UltraTax claimed the overall top spot again this year at 4.5, narrowly edging out Lacerte (4.4). Exhibit 1 shows products’ ratings for ease of use and versatility in several categories.

What users like about their tax prep software also showed a similar profile to previous years. Best-liked features of each software package are shown in Exhibit 2. For ease of use, ProSeries got the highest rating, with 48% picking that as the software’s best-liked feature. TurboTax and Lacerte were close behind. TaxACT, Drake, and TaxWorks users were particularly positive about their software’s price. Overall this year, price rose as the best-liked feature, from 8% in 2011 to 12% this year. Esteem for products’ accuracy dropped on average, with nearly 16% of respondents picking it as their most-liked feature this year, compared with 18% last year.

On the other hand, budget-conscious CPAs gave all three of the most-used products low marks for price: Lacerte users found little else to dislike about the software, but nearly 58% faulted its cost. Similarly, despite being generally pleased with the software, nearly a majority of UltraTax users disliked its price, as did 43% of ProSystem fx users. Few respondents were notably displeased about other aspects of any of the products, although 30% of GoSystem users reported ease of use as its least-liked feature, up from 25% last year. Exhibit 3 shows what respondents liked least about their software.

While price was the most chosen least-liked feature overall (37%), that was down from nearly 42% last year. The increase in overall satisfaction with tax prep software’s price may reflect the increase in the use of lower-priced software packages among respondents.

Dissatisfaction—again, mostly with the software’s cost—also highlighted reasons that respondents switched from a software package they had used in 2011 to prepare 2010 taxes (see Exhibit 4). Eight percent of respondents said they had switched from another product. Those saying they switched because of price (26% of all switchers) included 39% of former Lacerte users, followed by former users of ProSystem fx (37%), ProSeries (34%), and UltraTax (34%).

The next most salient reason for switching was the number of forms or comprehensiveness (11% of all switchers), given by nearly 43% of former TaxACT users and 29% of former Drake users. Overall, 79% of respondents said their software contained all the forms they needed. ATX rated particularly high in this regard, with 93% of users saying the software had all the forms they needed. For two products, fewer than 70% of users said they had all needed forms: ProSeries (69%) and GoSystem (51%).

The survey also asked if users plan to keep using the same software next year, finding an average of 86% saying they definitely would. This percentage was highest for UltraTax (92%), followed by Drake (90%). It was lowest for TurboTax (74%) and GoSystem (80%).

Price and ease of installation and use may also figure in responses to a new question this year: whether users would recommend their software to someone starting a tax practice (see Exhibit 1). Overall, 84% of respondents who answered this question said they would. The percentage answering “yes” was greatest for Drake (95%), followed by ProSeries and TaxACT (both nearly 91%). Among the “big three” of UltraTax, ProSystem fx, and Lacerte, the highest percentage of thumbs up was for UltraTax at nearly 89%.

This year, the survey explored respondents’ adoption of new developments in technology, such as cloud computing. Cloud computing is becoming a common phenomenon outside the field of tax prep software, both in consumer software applications and in business. Cloud computing refers to the use of software in which the application and/or the data reside on a third-party server and not on the user’s computer. Common examples include web-based email services, online banking, online document hosting services, and even social networking sites.

That 10% of respondents have already embraced cloud computing for tax prep software shows how quickly the cloud-computing model is becoming the norm. CCH, Intuit, and Thomson Reuters released their first web-based tax software for tax professionals in 2009. And it was not too long ago that many tax practitioners would refuse to prepare returns on computers that were hooked up to the internet, out of concerns that the data would be hacked.

In another new technology question, a significant segment of respondents (41% of those answering the question) indicated they would be interested in having their tax preparation software available on a tablet device such as Apple’s iPad. Asked if they have a virtual office, however, only 19% of respondents answering that question said yes, suggesting that most tax preparation work is still performed in a traditional setting of a business office rather than remotely. Client portals also showed little reported use, with only a little more than one-third of the respondents who answered that question saying they offered one in the latest tax season.

As in past years, a majority of users of all programs reported needing technical support for their software ( Exhibit 6). The overall percentage of CPAs saying they needed technical support was slightly lower (79%) than last year (82%), with a similar reduction in reports of support needed for several of the products. Again this year, most of this technical support was received by telephone (93% vs. 95% in 2011), with email a strong secondary means of communicating.

Similar to last year, users of ProSeries and Lacerte were more likely than users of other software to report receiving technical support by live online chat or instant message (35% and 27%, respectively). Also like last year, only a little more than about one-quarter of CPA respondents reported receiving any training from their software provider, but a majority of those who did reported its quality as either good (44%) or very good (26%).

INTEGRATION WITH OTHER SOFTWARE

Asked how well their software integrated with their accounting and other software, users overall gave it an average rating of 3.5 out of 5 (with 1 being very poorly and 5 being very well). UltraTax had the highest average at 4.1, followed by TurboTax at 3.8. The lowest ratings were for TaxWorks (3.0), with three programs—ATX, GoSystem, and TaxAct—all averaging 3.1.

Importing data into the software was generally not a problem for most CPA respondents, with a slight majority saying it was either easy (30%) or very easy (22%). Again, UltraTax and TurboTax were highly rated in this regard, with a 4.1 and 3.9 average rating, respectively (with 5 being very easy and 1 being very difficult).

The survey was conducted in May 2012 and received 6,070 responses. The exhibits show detailed answers for 10 of the 15 products included in the survey. Information and ratings for products that received fewer than 90 responses were not included in this article, but full survey results and additional information for each product is available here.


Paul Bonner is a senior editor, tax, for the JofA and The Tax Adviser. To comment on this article or to suggest an idea for another article, contact him at pbonner@aicpa.org or 919-402-4434.