In pursuit of inclusion: New initiative will focus on racial diversity 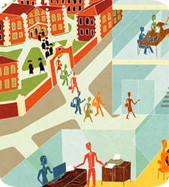 Even as Ken Bouyer looks with pride at the progress Ernst & Young LLP has made in recruiting minority candidates over the past 20 years, he realizes that his profession’s work to promote ethnic and racial diversity is far from over.

Bouyer, E&Y’s Americas director of Inclusiveness Recruiting, said that in 1993–94 10% of the firm’s campus hires were from minority groups. That number grew to 36% last year, he said. Those numbers illustrate the results of diversity recruitment efforts and a growing number of qualified minority applicants, he said.

But as the AICPA celebrates its 125th anniversary, diversity and inclusion remain elusive for the accounting profession, especially in the most senior levels. Minorities made up 20% of the professional staff positions at the 348 firms participating in the 2011 edition of the AICPA report Trends in the Supply of Accounting Graduates and the Demand for Public Accounting Recruits, but just 5% of the partners at those firms.

The statistics show why retention and advancement of minorities in the profession have emerged among diversity and inclusion advocates as issues that are every bit as important as continuing to recruit minorities to the profession.

“(The concern is), are people at all levels of their career finding the workplace environment one where they want to stay?” said Calvin Harris, national president of the National Association of Black Accountants (NABA).

In this respect, the profession’s difficulties in racial diversification mirror its challenges with respect to advancement of women. Although women made up 45% of the professional staff at firms in the Trends study, they accounted for just 21% of the partners. Nonetheless, all the Big Four accounting firms—plus BDO, Grant Thornton LLP, McGladrey & Pullen LLP, and Moss Adams LLP—appeared on imagazine’s 100 Best Companies list. And women have equaled or exceeded men among new accounting bachelor’s and master’s graduates hired by CPA firms in every Trends study since 2001.

Diversity and inclusiveness advocates still have their eyes on recruitment efforts to continue boosting overall enrollment in the profession. Bureau of Labor Statistics (BLS) data from 2010 show that 5.8% of accountants and auditors were Hispanic or Latino, and 8.6% were black or African American. The total U.S. labor force in 2010 was 14.3% Hispanic or Latino and 10.8% black or African American.

Bouyer calls diversity “an issue that the profession has to rally around. … This has to be a collective tug by the entire profession.”

That tug is about to get more collective. Bouyer will chair an AICPA-led commission that will bring advocacy groups together with employers. The National Commission on Diversity will include representation from minority professional advocacy groups; large, medium, and small firms and state societies; and leaders from business and industry, government, and education. Representatives from NABA, Latino advocacy group ALPFA, Pan-Asian professional business advocacy organization Ascend, and the Native American Finance Officers Association (NAFOA) are expected to participate. The commission is scheduled to meet for the first time in September.

Its purpose is to help all stakeholders put best practices into place while sharing resources and knowledge.

Richard Caturano, who will begin a one-year term as AICPA chairman in October, said diversity and inclusion in all aspects—racial, gender, socioeconomic—will be a major focus of his agenda as the new commission gets off the ground. Diversity is an important issue to Caturano because he grew up in a mostly blue -collar neighborhood. Tony LoConte, a sole practitioner in Revere, Mass., mentored Caturano, who’s now office managing partner in Boston for McGladrey & Pullen LLP. Now Caturano hopes to create more opportunities for underrepresented groups.

The stakes are high. A globalized economy is putting pressure on the profession to keep pace with change in the rest of the world. The United States is experiencing a shift, as the Census Bureau population projections from 2008 forecast that ethnic minorities will outnumber non-Hispanic whites in the nation by 2042.

If the demographics of the profession are to even come close to matching those of the population, the next 20 years will be a critical time for diversity and inclusion as new accountants and auditors step into the shoes of those who are retiring. In 2010, those age 45 to 64 made up 26.4% of the U.S. population, according to the Census Bureau. As that huge segment of the population reaches retirement age, a new group of professionals soon will be filling numerous job openings—and leadership positions—in accounting.

THE CHALLENGES OF MOVING THE NEEDLE

“Despite tremendous efforts, we have not had the type of success that we would like to have in the area of ethnic diversity in our profession,” he said. “We’ve had some success. But our profession doesn’t reflect society as a whole, or more importantly, entrepreneurial capital owners as a whole.”

In 1969, the AICPA passed a resolution to integrate accounting and formed what would become known as the Minority Initiatives Committee and the Education Fund for Minority Accounting Students. The goal was to assist underrepresented minorities in their efforts to become CPAs and advance in the profession, and progress is evident in some places.

According to the AICPA Trends study, ethnic minorities accounted for 17% of the new accounting bachelor’s and master’s degree graduates hired by CPA firms in 2001. That number increased to 25% in 2010.

ALPFA CEO Manny Espinoza said diversity initiatives across the profession have improved greatly since he began working as a practicing CPA in the early 1970s. But he said there is still a significant lack of critical mass of both African-American and Hispanic CPAs in the profession.

The problems with retention and advancement cut across all segments of the minority population in public accounting. Although BLS statistics show a strong Asian representation in the accounting and auditing workforce, for example, few Asians are reaching top jobs. In 2010, Asians made up 9.1% of accountants and auditors, compared with 4.8% of the working population, according to the BLS. But the AICPA Trends study shows that Asians and Pacific Islanders at public accounting firms made up just 2% of the partners despite representing 11% of the professional staff.

“The preponderance of the Pan-Asian representation in the colleges is very high, so they always get selected (for entry-level jobs),” said Jeff Chin, the national president of Ascend. “It’s a shame that they’re getting selected as the top talent to go into the accounting profession but then something breaks down and they get disenchanted and they don’t make it up to the partnership levels.”

One barrier for minorities seeking advancement is a lack of role models, said Noel Abdur-Rahim, a 29-year-old assurance manager at PwC in Detroit.

“You may see a partner, for example, and say, they have all the qualities that I want to embody,” she said. “They have the job that I want. They have the family and the knowledge and all of that. But they don’t look like me. To some folks, that’s intimidating, and to some folks, that’s a perceived barrier, that if they don’t look like me, I can’t be in that same position.”

Gail Sparks Pitts, the chairman of the AICPA Minority Issues Committee, said management at firms and organizations in the accounting profession believe in diversity, but struggle to implement it. She said individuals who resist diversity must be educated on the benefits of hiring people from different backgrounds.

“Just be more open to receiving someone who may not necessarily look or speak as you do,” Pitts said. “Actually, it could be a beautiful thing. You learn a lot from someone who is different, and it really does broaden your horizons and makes a difference, and I think we’re all a better world for it.”

Pitts said leaders in the profession must continue to expose young people of minority descent to the benefits of becoming a CPA. She said the Accounting Careers Awareness Program sponsored by NABA is a good example of an effective exposure tool. The one-week campus residency program gives selected students a chance to explore careers in accounting and business.

ALPFA, meanwhile, has established high school chapters in eight cities across the country. Espinoza said it’s important to expose children to the accounting profession at an early age.

“I think that’s the wave of the future, to continue to try getting them before they make decisions on their professions or their majors in college, to get them in front of role models and people that have been in the profession before and can speak clearly about the challenging and terrific experiences they’ve had as a CPA,” he said.

Improving retention, inclusiveness, and advancement is an AICPA goal, too. Ostine Swan, AICPA senior manager–Diversity Relationships & Initiatives, said the Institute has been working to:


Swan has asked each working group at the AICPA to determine what it’s doing to serve the membership in terms of its diversity. For example, she is working with the team that runs the AICPA’s conferences to develop a list of qualified minority speakers. When candidates for minority speakers are found, she is encouraging them to participate when invited.

One of the challenges for improving diversity in the profession, NABA’s Harris said, is helping smaller public accounting firms tackle the issue.

He said a motivated advocate such as Bouyer at Big Four powerhouse E&Y can draw from a vast pool of personnel and resources to help a large organization become more diverse. Smaller firms operate on smaller margins and may not have enough manpower to devote to diversity.

Harris said he encourages smaller firms to make use of resources available to them through NABA and other dedicated organizations to promote diversity. Now it’s hoped that the merging of prominent diversity voices within the profession through the National Commission on Diversity
will maximize the use of resources and the sharing of ideas as a new infrastructure around the topic takes shape.

“We’ve got to move the needle,” Bouyer said. “Sometimes you’ve got to be an advocate for diversity and not be afraid of that. And I think the AICPA … can continue to have a loud voice on this issue, and I want them to continue to speak loudly and continue to push, continue to agitate. I think collectively, as a profession, we’ll be much better off if we continue to do that.”

The AICPA is a leader in a new, national commission on diversity that has been formed to help eliminate duplication of efforts, and advance best practices in the effort to diversify the accounting profession.

Although recruitment of new minority talent to the CPA profession remains a focus, retention and advancement of minorities are emerging as equally important issues. Some progress has been made in diversifying overall staffing of public accounting firms, but minority representation is seriously lacking at the senior management and partner level.

The continued push for diversity comes at a critical time. As the population as a whole and the owners of entrepreneurial capital become more diverse and members of the baby boomer generation reach retirement age, it’s critically important for the CPA profession to keep pace with the changes in society. Despite years of efforts to promote racial diversity by the AICPA, firms, employers, and advocacy groups, minority representation in the accounting profession continues to lag.

Illustration by Otto Steininger/Three in a Box