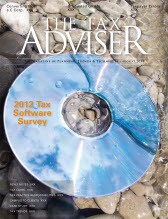 Earlier this year, Citibank surprised many of its customers by issuing Forms 1099-MISC, Miscellaneous Income, to report the value of frequent flyer miles the customers had received in exchange for opening new accounts as part of an ongoing promotion. Understandably, the customers were upset because, the value of the miles notwithstanding, many of them ended up paying dearly (through potentially as much as several hundred dollars in taxes) merely for opening an account.

With this announcement in place, why did Citibank file Forms 1099 to report the miles as income? The law is vague at best, and the instructions to Form 1099-MISC call for reporting of “prizes and awards” as income.

While conservative, Citibank’s approach may not be unreasonable under the circumstances. Penalties for nonfilers of Forms 1099 were recently increased to as much as $100 per form, up to $1.5 million per calendar year for inadvertent omissions (and, presumably, Citibank files many of them). For intentional disregard, penalties equal $250 per form, and there is no cap on the penalty. Finally, the IRS has made no secret of its intention to increase scrutiny in this area. Most 2011 business tax returns include new questions asking whether Forms 1099 are required and whether they have been, or will be, filed.

For a detailed discussion of the issues in this area, see “Taxation of Frequent Flyer Miles,” by Stanley E. Rose, CPA, in the August 2012 issue of The Tax Adviser.

Also look for articles on the following topics in the August 2012 issue of The Tax Adviser: