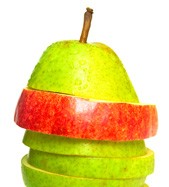 Given today’s environment of bankruptcies, bank failures and recessionary pressure, consummating merger and acquisition transactions is more challenging than ever. The potential disputes arising from the challenges of an M&A transaction are numerous. The following two types of disputes are the focus of this article: working capital disputes regarding whether the financial statements were in accordance with GAAP; and indemnity claims involving whether the buyer in the transaction obtained the benefit of the bargain.

Most post-acquisition disputes involve some form of financial forensics, and therefore lend themselves to general CPA skills. More often than not, however, these disputes involve specialized business valuation skills (see sidebar “Breaking Into Business Valuation”) and are well suited for experienced valuation professionals with a deep skill set in the interpretation of GAAP who are also damage experts and can be credible witnesses in this area (see sidebar “How to Get Experience in M&A-Related Disputes”). This article describes the types of issues that arise in these disputes.

Consider the following example of an M&A dispute in which a CPA may become involved:

Company A acquires Company B for $400 million, or eight times the annual EBITDA (earnings before interest, taxes, depreciation and amortization) of $50 million. Company A alleges Company B overstated EBITDA by $10 million as a result of material misrepresentations involving GAAP violations. Company A alleges it bargained for a business worth $400 million and received a business worth $320 million, or EBITDA of $40 million x 8 (the EBITDA multiple).

Post-acquisition disputes between an acquirer and a target company (selling shareholders or management) can arise in various ways, each with unique facts and circumstances producing a combination of accounting, valuation and legal issues. While parties to mergers and acquisitions attempt to create a purchase and sale agreement that clarifies the responsibilities and duties of each party, contracts are often imperfect and open to interpretation, resulting in disputes after the purchase and sale agreement is executed or the transaction is consummated. The most common M&A disputes involve post-closing adjustments for working capital or net assets, indemnity or fraud claims, material adverse change (MAC) claims, and earnout disputes (when both buyer and seller share the risk), among others.

In a typical acquisition transaction, the target company’s purchase price will be evaluated as a multiple of trailing 12 months reported EBITDA with an adjustment for any working capital excess or deficiency above or below a contractually agreed upon level. The target company’s required level of working capital at closing will typically be negotiated, agreed upon and specified in the purchase and sale agreement.

The target company’s actual levels of working capital will be established by its closing balance sheet presented in accordance with GAAP. ( Note: The requirement for GAAP presentation of the target company’s closing balance sheet is a common provision of purchase and sale agreements, however, other, non-GAAP agreed-upon accounting principles or amounts may be specified.)

Here we examine the issue of measuring damages in a dispute involving both working capital and indemnity claims. Working capital claims are typically measured on a dollar-for-dollar basis while indemnity claims can be measured dollar for dollar, over a finite period or into perpetuity. For indemnity claims that imply a permanent impairment to the value of the business, the damages may be measured “at the multiple” (the purchase price divided by the EBITDA of the subject company). The measurement of damages into future periods is predicated on assessing whether:

For example, the buyer may allege that $10 million of invoices was not recorded as accounts payable on the balance sheet and assert a working capital claim for a purchase price adjustment. In addition, the buyer may also assert a fraud claim alleging the seller deliberately withheld the information and that it was material to the buyer. As a result of not recording the invoices, the target company’s expenses were understated, and EBITDA was overstated. The buyer may claim the purchase price was based on eight times the target’s trailing 12 months EBITDA and, therefore, demand a purchase price adjustment of $80 million.

Using the example of $10 million of unrecorded invoices, the question to consider is: Will these expenses impact the target’s future performance? If the invoices relate to costs to execute the transaction (one-time items), they would be assumed to be nonrecurring and have no impact on future earnings. However, if they represent incremental ongoing expenses and would have altered the buyer’s valuation conclusion, that should be considered along with other economic evidence. If they relate to ordinary expenses such as payroll that is expected to continue in the future, there may be an impact on the target’s future earnings and, therefore, its valuation.

The invoice example is a fairly straightforward situation, but what if a significant customer was lost just before the transaction, and this was not disclosed to the acquirer? This is not typically a working-capital claim. Because the customer’s contribution to the profits of the business would impact future earnings and, therefore, current value, nondisclosure of the customer loss represents a potential claim by the buyer. To get to the core of the issue, the CPA expert needs to ask if the customer will be replaced and if its departure was part of ordinary customer turnover; or if the customer is a key source of value to the business. The buyer may make a “benefit-of-the-bargain claim” arguing it did not receive the value that was represented to it by the seller based on the failure to disclose the loss of the customer.

Drawing a parallel to intellectual property damage theory, a consideration in assessing damages is using the benefit of hindsight to evaluate what actually happened with a specific claim and the target company after the transaction (known as the “Book of Wisdom” for intellectual property cases). For example, in a working capital claim, if the buyer alleges accounts receivable were overstated but collects all of the accounts receivable post-closing, it is an indication that the reported balance was valid. Likewise, if the loss of a major customer merely represents customer turnover and does not affect future performance, and the value of the company post-closing is substantially the same or greater than what the buyer expected at the time of the transaction, the buyer may have received the benefit of the bargain.

Another important factor to consider is the seller’s perspective. However, if theseller made material misrepresentations, this may diminish the significance of the seller’s perspective. Just because a buyer makes a claim that it would have paid less for a company, it does not mean the seller would have accepted less, particularly if in the subsequent period the business is worth at least the amount of the purchase price. This may be evidence the buyer received the benefit of the bargain. This leads to another parallel to intellectual property damage theory: the hypothetical negotiation as described in Georgia Pacific v. U.S. Plywood Corp. (318 F. Supp. 1116 (S.D. N.Y. 1970); see, also, “How Reasonable Is Your Royalty?” JofA, Sept. 08, page 56). Similar to the application of the Georgia Pacific factors in a reasonable royalty analysis, there are factors that both the buyer and seller would likely consider if the information surrounding the dispute had been discussed contemporaneous to the transaction. Factors to consider include:

a. Is the item in dispute a working capital or indemnity claim, or both?

b. What period(s) does the disputed item impact—current, multiple or perpetuity?

c. What impact does the item have on the company’s cash flows?

d. What impact does the item have on the company’s overall risk profile?

e. What impact does the item have on the comparability to guideline companies if the valuation multiple were based on such companies?

f. What were the seller’s alternatives to a sale to the buyer?

g. What valuation approaches and methodologies were used by the parties to the transaction?

a. How did the item in dispute materialize?

b. How does the financial performance of the subject company compare to the buyer’s expectations at the time of the deal?

c. How does the financial performance of the subject company compare to the seller’s forecasts at the time of the deal?

These factors are intended to provide general guidance as it is important to consider all of the facts and circumstances of each case when assessing post-merger-and-acquisition damages.

A simplified case study example helps illustrate how M&A purchase price adjustments could be claimed by a buyer against a seller in a post-acquisition dispute.

Facts. ABC Co. is a leading global supplier of axles, brakes and other components for off-highway and specialty vehicles. The buyer paid $350 million, or 8.4 times EBITDA of $41.67 million.

Buyer’s claim. Two million dollars in working capital claims resulted in EBITDA being $2 million less than represented. The buyer claims it is entitled to $18.8 million in damages consisting of: (1) $2 million in dollar- for-dollar working capital adjustments, and (2) $16.8 million in lost value ($2 million lower level of EBITDA x 8.4 multiple of EBITDA paid for company) as the buyer did not receive the benefit of the bargain. Exhibit 1 shows the buyer’s damages calculation.

Seller’s defense. Working capital claims should be settled on a dollar-for-dollar basis after the merits of each claim are established. The seller asserts that the buyer is not entitled to benefit-of-the-bargain damages of $16.8 million because: (1) the seller did not warrant/represent EBITDA projections, (2) the buyer obtained the benefit of the bargain as the company was worth significantly more than the purchase price one year after the closing (company’s EBITDA grew significantly post-closing), and (3) there had been no major downturn in the target company’s performance after the transaction’s closing directly attributable to the claimed misrepresentations. Exhibit 2 shows the seller’s damages calculation. 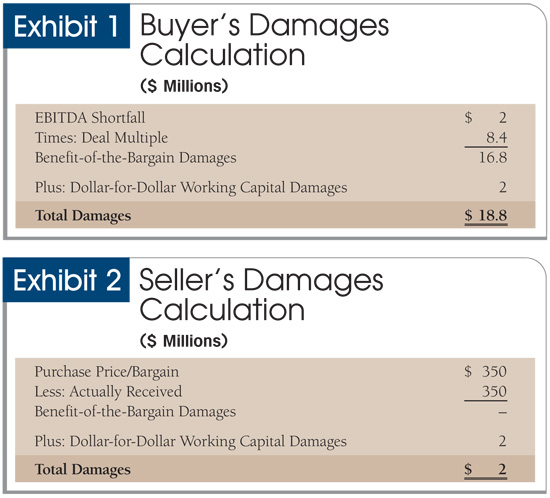 Legal actions involving claims for post-acquisition purchase price adjustments are a growing area where a CPA’s expertise in GAAP, financial forensics and business valuation is in high demand. A CPA may become involved in a post-M&A transaction to quantify the benefit-of-the-bargain damages in a dispute.

Membership in the Forensic and Valuation Services (FVS) Section provides access to numerous specialized resources in the forensic and valuation services discipline areas, including practice guides, and exclusive member discounts for products and events. Visit the FVS Center at aicpa.org/FVS. Members with a specialization in forensic accounting may be interested in applying for the Certified in Financial Forensics (CFF) credential. Information about the CFF credential program is available at aicpa.org/CFF. Resources on economic damages are available at tinyurl.com/ygvwdf6.