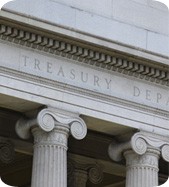 The act creates a Small Business Lending Fund to address ongoing effects of the financial crisis on small businesses by allowing the Treasury Department to make capital investments in eligible financial institutions to increase credit available for small businesses. Independent community banks may participate in the new $30 billion lending fund on the condition they make loans to small businesses and meet other requirements. Financial institutions (bank and savings and loan holding companies, depository institutions, and community development loan funds) with $10 billion or less in total assets may apply for capital investments of up to 3% of risk-weighted assets.

Other small business lending provisions in the act include:

Online information center. The act directs the SBA to create an online lending platform that lists all lenders that make SBA-guaranteed loans and provides interest rates for each lender.

Nonprofit lenders pilot. The act also creates an intermediary lending pilot program to allow certain private, nonprofit entities that seek or have been awarded SBA loans to make loans to small businesses. The pilot will allow $20 million in loans each year from 2011 to 2013 to not more than 20 eligible entities. Eligible nonprofit organizations may apply for up to $1 million for the purpose of making loans of up to $200,000 to eligible small businesses.

Express loan enhancement. The maximum amount of express loans under Section 7(a) of the Small Business Act is increased to $1 million from $350,000 for one year from the date of enactment (Sept. 27, 2010).

The act also establishes a Small Business Teaming Pilot Program, which will promote federal contracting opportunities for joint ventures and small businesses. The program is scheduled to run for five years.

Federal agencies are required to solicit bids from any responsible source, including small business concerns, teams and joint ventures, for multiple award contracts above the substantial bundling threshold of the agency. The act also revises the federal contracting and reporting requirements. Electronic annual certifications of small business size and status are required for ongoing eligibility as a small business contractor. Small business classification criteria must be reviewed by the SBA at least once every five years.

The act requires the comptroller general to study strategic mentoring alliances between large and small businesses as a way of getting small businesses access to federal contracts. The study will examine potential competition between mentor and protégé, systems to assure substantive benefit to the protégé, and agency processes to administer or monitor such programs. The study must be completed within 180 days of the act’s enactment.

The act contains measures designed to encourage small businesses to become exporters or to increase their export activities. The SBA will create a pilot three-year trade and export promotion program that will make grants to states to carry out export programs that assist eligible small businesses.

A seven-year small business credit initiative is established to allocate federal funds (up to $1.5 billion) to participating states.

Many of the act’s provisions provide tax relief for businesses.

Section 179 expensing and bonus depreciation. The act increases the maximum amount a taxpayer may expense under IRC § 179 to $500,000 and increases the phaseout threshold amount to $2 million for tax years beginning in 2010 and 2011. The first-year 50% bonus depreciation available under IRC § 168(k) is extended for one year to apply to property acquired and placed in service in 2010 (or 2011 for certain long-lived and transportation property). The act also allows taxpayers using the percentage-of-completion method to take into account the cost of qualified property as if bonus depreciation had not been enacted.

Self-employed individuals’ health insurance. The act allows self-employed individuals who deduct the cost of health insurance for themselves and their spouses, dependents, and children who have not attained age 27 as of the end of the tax year to take the deduction into account in calculating net earnings from self-employment for purposes of SECA taxes. This provision applies to the taxpayer’s first tax year beginning after 2009.

The act also requires the IRS to report to Congress by Dec. 31, 2010, and then annually, on penalties assessed for certain tax shelters and reportable transactions (under sections 6662A, 6700(a), 6707, 6707A and 6708). The penalty under section 6707A has been criticized because the penalty amounts often exceed the tax benefit of the targeted transactions. The IRS has since July 2009 been working under a self-imposed moratorium on collection enforcement of the section 6707A penalty to give Congress time to amend the penalty amounts. The AICPA has recommended that the IRS be allowed to abate the section 6707A penalty in cases where the taxpayer has acted reasonably and in good faith. The AICPA also believes that judicial review should be allowed in cases where the IRS has assessed a penalty under section 6707A. Congress did not adopt either of these recommendations.

Cell phones. The act removes cell phones from the definition of listed property. Thus, the heightened substantiation requirements and special depreciation rules that apply to listed property under IRC § 280A will no longer apply to cell phones. However, the Joint Committee on Taxation’s Technical Explanation of the act notes that this change “does not affect Treasury’s authority to determine the appropriate characterization of cell phones as a working condition fringe benefit under section 132(d) or that the personal use of such devices that are provided primarily for business purposes may constitute a de minimis fringe benefit, the value of which is so small as to make accounting for it administratively impracticable, under section 132(e).”

The AICPA recommended this statutory change in comments to the IRS.

Annuitization. The act permits a portion of an annuity, endowment or life insurance contract to be annuitized while the balance is not annuitized, provided that the annuitization period is for 10 years or more or is for the lives of one or more individuals. The annuitized portion will be treated as a separate contract for purposes of IRC § 72. This provision is effective for amounts received in tax years beginning after Dec. 31, 2010.

Federal contractor levies. The act allows the IRS to issue levies prior to a collections due process hearing with respect to federal tax liabilities of federal contractors identified under the Federal Payment Levy Program, effective for levies issued after Sept. 27, 2010.

Income from guarantees. The act overrides the Tax Court’s recent decision in Container Corp. v. Commissioner, 134 TC no. 5 (2010), by amending the IRC §§ 861 and 862 source rules to address income from guarantees issued after Sept. 27, 2010. Under new IRC § 861(a)(9), income from sources within the United States includes amounts received, whether directly or indirectly, from a noncorporate resident or a domestic corporation for the provision of a guarantee of indebtedness of such person. This applies to guarantees issued after Sept. 27, 2010.

Matthew G. Lamoreaux ( mlamoreaux@aicpa.org ) is a JofA senior editor, and Alistair M. Nevius (anevius@aicpa.org) is editor-in-chief of The Tax Adviser and a JofA contributing editor.