"SUBSTANTIAL AUTHORITY" SIGNED INTO LAW OCT. 3
The IRC § 6694 tax preparer standard was raised to the “more likely than not” standard in May 2007 as a part of the Iraq War funding bill. Reps. Joseph Crowley, D-N.Y., and Jim Ramstad, R-Minn., introduced legislation (HR 4318) on Dec. 6, 2007, to equalize the taxpayer and tax preparer standards at “substantial authority.” The bill had 49 co-sponsors. Sens. Kent Conrad, D-N.D., Jim Bunning, R-Ky., and Orrin Hatch, R-Utah, introduced a companion bill in the Senate (S 2851) on April 14, 2008. The bill had nine co-sponsors. Twenty state societies sent 28 members, who are on the House Ways & Means Committee or the Senate Finance Committee, letters of support. The AICPA engaged the following associations to support our position: ABA Tax Section, National Association of Black Accountants, National Association of Enrolled Agents, National Association of Tax Professionals, and Tax Executives Institute.

The legislation was part of the financial markets rescue package Congress passed and President Bush signed on Oct. 3. Equalizing the IRS reporting standards for taxpayers and tax preparers was the right thing to do. Congress understood that and acted quickly. The AICPA is thankful to Congress for its swift action.

FARM BILL ENACTED OVER VETO
The Farm Credit System (FCS) asked Congress to increase its pool of eligible borrowers to include entities that are involved in renewable energy. The provision was broad enough to include many nonagricultural businesses, for example, hardware stores in farm communities, truck and farm equipment dealers, and similar businesses that sell their goods and services to farmers. The practical effect of this provision, if enacted, would have been to allow the FCS to offer these new eligible borrowers financial services, including audit, accounting and tax services. Because the FCS enjoys government tax and funding advantages that private-sector accounting firms would find difficult to compete with, the AICPA opposed the ability of the FCS to offer financial services to new eligible borrowers. We did not, however, oppose the expansion of the lending authority.

The Farm Bill (HR 6124) became law (PL 110-246) over the president’s veto without the increased ability to lend to businesses involved with renewable energy.

FHA AUDITS
The AICPA’s advocacy on Capitol Hill was successful in preventing Congress from lowering mortgage broker standards. A bill introduced early in the 110th Congress would have allowed a correspondent lender or mortgage broker who sells FHA loans to post a surety bond, in lieu of any requirement to provide audited financial statements or meet a minimum net worth requirement.

On July 30, President Bush signed the Housing and Economic Recovery Act of 2008 (PL 110-289). The purpose of the legislation is to assist homeowners facing foreclosure and improve oversight of mortgage giants Fannie Mae and Freddie Mac, which subsequently were taken over by the federal government in mid-September.

Congress did not change the FHA audit requirements, and the resulting law keeps in place the standards for audits that the FHA has long required: that mortgage lenders and brokers who sell FHA-insured loan products must first obtain a financial statement audit and meet minimum net worth requirements. In addition, the required compliance audit provides a check on whether lenders have complied with FHA laws and regulations.

The AICPA strongly opposed changing the audit requirement, and its message was successful: The audit is a tool that provides assurance that certain mortgage brokers have not materially misstated their financial condition. In addition, removing the audit requirement could permit bad actors to take advantage of FHA products to the detriment of borrowers and taxpayers.

ONGOING LEGISLATIVE CAMPAIGNS
Two of the accounting profession’s legislative initiatives, tax strategy patents and multistate income tax, remain AICPA priorities. The push for passage of these bills will continue into the 111th Congress.

TAX STRATEGY PATENTS
The patentability of tax strategies is a growing concern among tax practitioners and taxpayers. In 1998, the Federal Circuit Court of Appeals, in State Street Bank & Trust v. Signature Financial Group Inc. , held that business methods could be patented. Since then, 70 patents for tax strategies have been granted, and at least 118 patent applications for tax planning methods are pending.

Patents for tax planning methods have already been granted in a variety of areas, including the use of financial products, charitable giving, estate and gift tax, pension plans, tax-deferred exchanges, and deferred compensation. One patent granted is for the process of computing and disclosing the federal income tax consequences involved in converting a traditional IRA to a Roth IRA. We expect many more tax planning method patents to be issued, directly targeting average taxpayers in a host of areas including: (1) income tax minimization; (2) alternative minimum tax (AMT) minimization; and (3) income tax itemized deduction maximization.

The AICPA believes that patents granted for tax planning methods:


The AICPA believes that patents for tax planning methods undermine the integrity, fairness and administration of the tax system and are contrary to sound public policy. Legislation (HR 2365) was introduced by Reps. Rick Boucher, D-Va., and Bob Goodlatte, R-Va. The bill has 40 co-sponsors. The House passed a similar version of this bill as part of a larger patent reform bill (HR 1908) on Sept. 7, 2007.

In the Senate, Finance Committee Chairman Sen. Max Baucus, D-Mont., and Ranking Member Sen. Charles Grassley, R-Iowa, introduced tax strategy patent legislation (S 2369). The AICPA reached out to all 100 Senate offices, organized the delivery of more than 15 state society letters urging support and co-sponsorship, and engaged in a targeted lobbying campaign in six states with the help of state societies and key persons. The bill has 30 co-sponsors.

The prospects for 2009 are bright given that the bill passed the House last year and Finance Committee leaders have a strong ongoing commitment to it.

TAX PATENTS GRANTED: 70; TAX PATENTS PENDING:118
With the number of tax strategy patents increasing, awareness by policymakers has increased, and there is more urgency to find a solution. 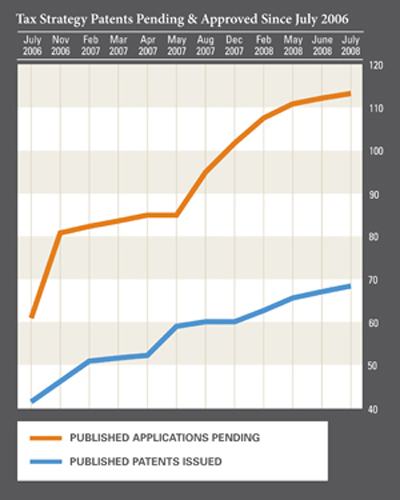 MULTISTATE INCOME TAX LEGISLATION
The Mobile Workforce State Income Tax Fairness and Simplification Act (HR 3359) creates a uniform national standard for state income tax withholding for employees who work in a state other than their state of residence for more than 60 days per year. The bill was introduced by Reps. Hank Johnson, D-Ga., and Chris Cannon, R-Utah. It applies only to employees: Partnerships must still determine where their income is from and file appropriate state partnership returns.

Because state tax administrators and a coalition of business groups have recently reached a compromise, the outlook for this issue next year is good. Rep. Johnson is planning to introduce the compromise language worked out this year in the next Congress and move it through the House Judiciary Committee, of which he is a member, and the full House.

SMALL BUSINESS HEALTH CARE
In June, the Small Business Health Options Program (SHOP) Act was introduced by a bipartisan group of House members. The bill seeks to improve access to affordable health care for small businesses through insurance market reform and tax incentives. A similar bill was also introduced in the Senate.

The legislation is targeted specifically for small businesses with 100 or fewer employees. SHOP seeks to lower costs and provide a simpler way to shop for and expand the choice of health insurance policies.

Key provisions of the SHOP Act include:


A series of hearings was held prior to the SHOP Act’s introduction to hear from all stakeholders in the health care debate. The AICPA testified before the House Small Business Committee on the issues of affordable health care options for small businesses. Lee Groza, president of the Kentucky Society of CPAs, presented testimony on behalf of the AICPA.

OUTLOOK FOR THE 111th CONGRESS
A larger Democratic majority in Congress, coupled with the Obama administration, means that liability reform is likely not on the agenda. Congress is likely to spend much of early 2009 looking at the credit crisis, which could lead to new regulation of the financial services sector, and accounting issues may be part of that discussion. The SEC will face heightened congressional scrutiny as part of this debate. The financial rescue bill calls for a 90-day SEC study of mark-to-market accounting due out in early January; this will coincide with the start of the 111th Congress and spark heated discussion. In addition, there may be an attempt to reverse the Supreme Court’s Stoneridge decision. Many of Bush’s tax cuts are expiring soon. There will be a major debate next year about which provisions, if any, should be extended.

For further information on these legislative issues and congressionalrelated inquiries, please contact the Congressional and Political Affairs Team at congaffairs@aicpa.org or 202-737-6600.